Inspired by Emily Hartop at SACNAS 2016 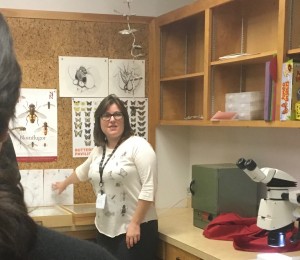 Emily Hartop shows a group of 2016 Sacnistas her many drawings of fly genitalia used to characterize species.

In science (and other fields) sometimes you have the opportunity to carve out your own job niche by showing fearless initiative. I met someone like that at SACNAS, and she really inspired me. I met assistant collections manager Emily Hartop when I visited the Los Angeles Natural History Museum as part of a SACNAS 2016 Field Trip sponsored by BEACON Center for the Study of Evolution in Action and the Society for Systematic Biologists (SSB).

Ms. Hartop saw the huge backlog of fly specimens that needed to be catalogued and jumped right in to do it. She didn’t know a lot about the family of flies known as phorids when she first tackled the backlog, but now she’s an expert. I particularly took note of the fact that though one might expect someone in Hartop’s position to have a graduate degree, she began at the museum with an undergraduate degree and through curiosity and hard work she developed a graduate level of understanding and expertise. And her bosses took notice of that.

I am in my second year of studying to earn an MS degree in chemistry at the University of California, San Diego (UCSD). However, because my undergraduate degree is in history I sometimes feel so lacking in background that I freeze up. After meeting Ms. Hartop at SACNAS I have noticed that I have been better at latching on to any part of the class material that grabs me and then just building up as much understanding as I can from there. I try not to worry as much about what I don’t know, and focus on what I can know.

Read about how Hartop discovered 30 new species of flies in the backyards of Los Angeles.

Sonjiala (SON-ja-la) is currently pursuing an MS degree in chemistry at UC San Diego. As a member of the Bridges to Baccalaureate Program at San Diego Mesa College, her research in organic chemistry includes the synthesis of fatty acid esters of vitamin C that will be tested for their ability to inhibit glycolytic enzymes. In an additional research project she uses analytical chemistry techniques to determine the composition of World War II era California pottery.