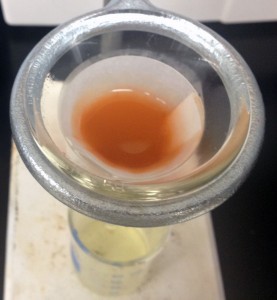 The red color in this pottery came from dye, not iron.

This photo is from an independent study project during which the iron content was determined for various pottery samples. There was an expectation that the red pottery might have iron as iron oxides are known to impart a red color to pottery. In this case it appears that red dye was responsible for the color, not iron. The pottery sample was collected using a drill and then was dissolved in acid with heat. The iron present was in the form of iron(III) which forms complexes with a yellow color. The dye particles were reacting with one of the reagents in the procedure. This filtration step was added to remove the particles before continuing with the determination. After hot filtering of the dye, the yellow color from the iron(III) complexes was more readily observable. The iron content of this sample was 0.2%.

Sonjiala (SON-ja-la) is currently pursuing an MS degree in chemistry at UC San Diego. As a member of the Bridges to Baccalaureate Program at San Diego Mesa College, her research in organic chemistry includes the synthesis of fatty acid esters of vitamin C that will be tested for their ability to inhibit glycolytic enzymes. In an additional research project she uses analytical chemistry techniques to determine the composition of World War II era California pottery.